Is a Signature Still Useful?

There have been calls to phase out signatures from the banking industry. But have our own personal autographs really had their day?

Does yours have a big, swooping “y” and “g”? What about heart-shaped dots over the “i”? Is it small and neat or vast and sprawling? Or just a perfunctory “x” on the line?

You might have spent years perfecting its every contour. Or you might just scrawl a desultory squiggle to show you’re much too busy for such self-indulgence.

Either way, you have a signature. It’s there on your passport, your debit cards and your driving licence – as much a part of your bureaucratic identity as your date of birth or your National Insurance or Social Security number.

Although perhaps not forever.

The signature is in retreat. Chip and Pin, contactless payments, biometrics – all make it theoretically redundant. All, say, advocates, are safer, more secure, and harder to forge. 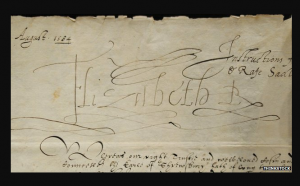 In an age when cheque guarantee cards are a thing of the past, it’s a rare trip to the supermarket that involves the assistant giving the back of your Visa or American Express more than a cursory glance. Except in the US of course.

The time has come, say the finance industry’s less sentimental denizens, to strike a line through this long-standing custom for good.

“The signature is an artefact we don’t need anymore,” says King. “It’s a hold-over from many years ago. I think there will be a natural evolution where the signature dies a slow death.”

And yet. There’s something profoundly satisfying about marking your own unique inscription. 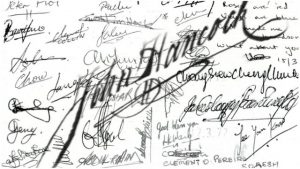 Can signatures survive in the digital age?

It’s the one satisfying flourish of personality you’re allowed at the foot of a neatly-typed business letter. It’s the scribble in a greetings card that shows a loved one is thinking of you. It’s the autograph you first honed as a teenager in the demi-expectation you’d become a pop star or a sporting hero.

There’s an expectation that it should be a thing of grace and dignity. When Jack Lew was proposed as US Treasury Secretary – meaning his signature would appear on all dollar bills – there was a widespread mockery of his looping, corkscrew-like imprint. President Barack Obama announced, apparently only semi-jokingly: “Jack assures me that he is going to work to make at least one letter legible in order not to debase our currency.” 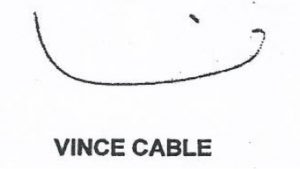 The standard set by Elizabeth I – whose elaborate royal inscription is perhaps one of the most famous in history – is a hard one to match. John Hancock’s artfully-rendered designation on the US Declaration of Independence is so widely celebrated that his name has become a byword for “signature” among Americans.

What’s more, signatures go back a long way in human culture. A Sumerian clay tablet from around 3100 BC is marked with the name of the scribe Gar Ama. The Romans used signatures as far back as the reign of Valentinian III in 439. El Cid left one in 1069, but it wasn’t until the British Houses of Parliament passed the Statue of Frauds in 1677 – which required that contracts be signed – that the signature became the commonly-understood acclamation of assent.

For its time, it was an effective – though never entirely failsafe – guarantee against fraud. Now, however, it has been superseded. 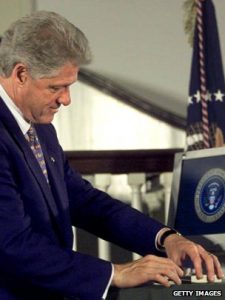 Bill Clinton signed the first US bill into law electronically

The US is one of the few developed nations that require signatures at the point of sale rather than Chip and Pin, and it reportedly accounts for more credit card fraud than the rest of the world combined.

Compared with a fingerprint, or an eye scan, “it is relatively easy to copy or alter,” says identity fraud expert Tom Craig.

This perhaps makes it feel strange that where the signature is still used in the banking system, it’s on the really important things – on a mortgage application or a large withdrawal of money in a branch. But there’s always a system of checks around the signature – photo ID or a credit check – that show the signature can’t be trusted on its own. It exists in the form of assent to an agreement but much less so as an identifier.

It’s a matter of time before voice recognition technology or biometrics replaces it altogether, Craig believes. “I can see the signature dying out – not in the near future, but eventually.”

Already the alternatives are well-established. In 2000 President Bill Clinton signed the first US bill into law electronically. Now Obama has an Autopen stylus which he has used to imprint his signature on to legislation while on holiday in Hawaii. Similarly, the author Margaret Atwood created a device called a LongPen which allows her to remotely autograph books for fans.

All this has led to fears that the art of the signature is dying out.

The Canadian media has fretted that children are simply printing their name rather than signing because of the dominance of digital. The US Common Core State Standards Initiative, which aims to ensure consistency in US education, makes no mention of handwriting, although seven states – California, Idaho, Indiana, Kansas, Massachusetts, North Carolina and Utah – have moved to keep cursive mandatory. 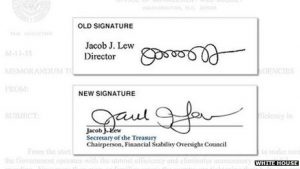 Across the Atlantic, it’s a different story. The National Curriculum due to take effect in England from September 2014 requires pupils to be taught “fluent, legible and, eventually, speedy handwriting”.

There’s a recognition among educationalists that “writing is about more than making these marks on a page”, says Rhona Stainthrop, professor of education at the University of Reading, who works with the National Handwriting Association. And this applies to signatures as well as to ordinary script.

“I do know when I talk to young children they’ve got this concept of a signature,” she says. “It’s something you see in late primary school – they begin to start developing one. They’re making Christmas cards and Mothers’ Day cards in class and signing them.”

The fact this kind of attachment is formed to our own signatures at such an early age suggests the signature may have more life in it than the techno-enthusiasts might imagine. If it survives, it won’t be because it’s safer or more efficient, but because people develop an emotional attachment to their own one.

“It’s not like a Pin,” Mike Allen, a forensic document analyst with 30 years of experience. “It’s someone making their mark and saying ‘I agree with this.’ It’s not about being safer – the value of it is that it’s you.”

More than that, it’s also uniquely and entirely yours. Sincerely.